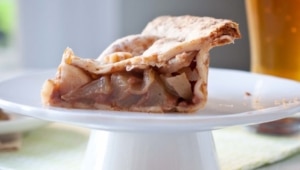 When it comes to baking, I’m always intrigued by a new spin on an old favorite. Not to say that I don’t fully appreciate the simplicity and beauty of a perfect and well done classic recipe.  I’ll never tire of a traditional, straight forward apple pie with a huge scoop of homemade vanilla bean ice cream.

But I was introduced to the pure magic of a cheddar pie crust as an encasement for a traditional apple pie, by Kelly of Evil Shenanigans. I couldn’t stop thinking about how much I want to beer-ify (it’s a word) that perfect pie. Kelly’s cookbook, Not So Humble Pies is all about how to take that sweet little pie you’ve always loved and turn it into something they’ll never forget. She even agreed to let me post my modified and beer-ified version of the crust that’s in her book. Maybe because she watched me greedily inhale two pieces of her pie in record time and was afraid of my possible reaction to not having said pie in my life any longer.

Here is my beer version of an apple pie with a cheddar crust. Which served as dessert, then breakfast the following day, then dinner. Crust adapted from Not So Humble Pies, Kelly Jaggers 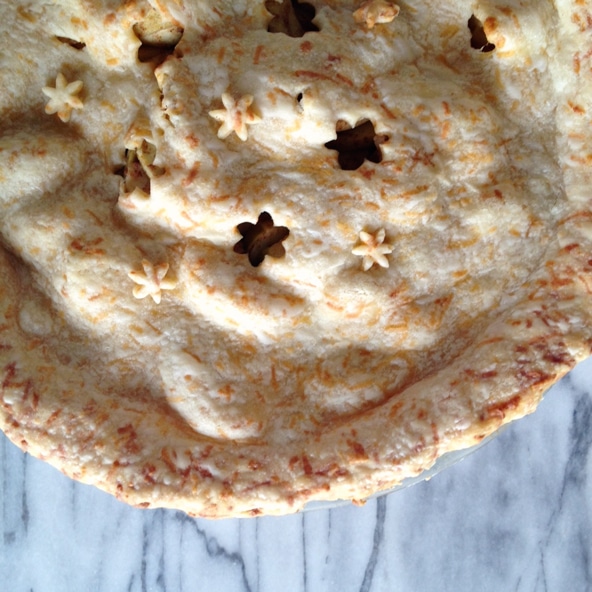 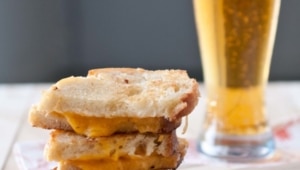 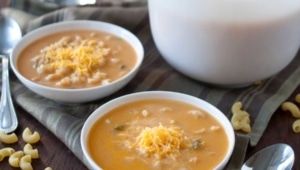 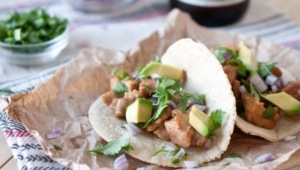 Wow, that sounds tasty. I’m going on a beer tasting jaunt to a craft beer cave/bar this weekend, so I’ll need to pick up something appropriate to make this with!

Yes! I love adding special touches to old favorites, you have nailed it here, my friend. I love apple pie, wish I had a slice right this second!

Cheddar Crust? Is that a thing?? This looks AMAZING.

Excellenty!! What about a dollop of chocolate stout ice cream? 😉 I want to beerify something but usually it’s just my belly…

I totally want to go apple picking next month and now I know what I’ll do with some of the apples! Apples are so good with cheese.

Just…shut up. I love this Jackie!! Why don’t we live closer? We could eat this, drink beer and laugh and be awesome together.

This looks amazing. I love a good cheddar crust on an apple pie. Great spin on it!

I ended up making this with store bought crust to save time, but it still turned out awesome! Thank you!

I used Trader Joe’s 2013 Vintage Ale, I thought the spices from the beer would work well in an apple pie.

Next time….next time totally making the cheddar crust, even though my husband doesn’t understand why someone would make such a thing. Cheese makes everything better; )

I made this! I usually just share links with my husband and give him puppy dog eyes but I’m the baker and the pie maker so this one fell on my shoulders. I hate making crust. It’s not my strong point. I was reluctant to make it here because I didn’t want to screw it up. I’m glad I challenged myself because it was the best crust ever! I’ve never been able to perfect that tender, flaky, buttery goodness without a box with a dough boy on it– until now. Loved the filling (it tasted like I was eating McKenzie’s Seasonal Reaserve). I can’t wait to make this again and again and again! Any ideas for using the reserved liquid from the beer soaked apples?