I’m going to be honest with you, I’m not a huge fan of pork chops. That being said, if I’m going to eat a pork chop, it better be a damn good pork chop or I’d rather just have take out. Over the years I’ve figured it out, mostly after receiving an unsolicited shipment of a gigantic box of high quality pork chops that I needed to figure out how to use.

The elements of the Perfect Pork Chop include: breading that stays on, juicy not dry, and a perfect golden brown on the outside, with a perfectly cooked inside. It took me a while, a few dry chops, and several hours spend google educating myself, but I figured it out, and it’s not that difficult.

Second, is that stupid breading that always slips off. It took me a while (I can be stubborn), but both of these issues are solved with the same step. Bread the pork chops (this also seals in the juices) and let them sit for about 20 minutes at room temperature. This brings the temperature of the center of the meat up helping the entire chop to cook evenly, and it helps the breading to set, allowing it to stay on. Don’t freak out about raw meat sitting on the counter for 20 minutes. Think about the day you bought those chops, picking them up at the meat counter, putting them in your cart, checking out, driving home, and then finally putting them in your fridge, I bet that took longer than 20 minutes. I grew up on a farm, that "drive into town," used to take us about an hour. It’s fine. I also highly recommend this for steaks, and I even read a vintage fried chicken recipe that called for two hours of room temperature counter sittin'. I was too chicken to try it (pun fully intended).

Also, buy a meat thermometer. Seriously. Right now, buy one. You can pick one up at the grocery store for about $10, and if that saves you one overcooked dinner, it just payed for itself. The recommendation for whole pork (not ground) was just lowered to 145 by the USDA, I usually cook it until just before this (about 140) because it will rise about 5 degrees once you remove it from the pan. Knowing the exact right moment to take the chops off the heat will be the difference between dry, average tasting pork chops and amazing, juicy pork chops.

Ok, and lets talk about this merlot cherry onion jam situation. I love homemade savory jams right now, and clearly I like to add booze to my food. I want to make this jam again for burgers, or maybe to stuff in a pork loin. or maybe I’ll just make these pork chops again.

This turned out amazing! I hope you love it as much as I do. 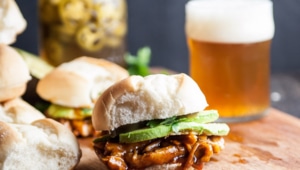 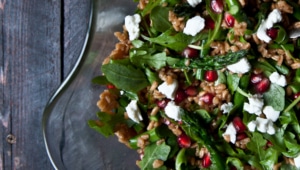 My mom made SO many pork chops when I was growing up that I just completely ignored them as an adult. But these… wow. I think I may need to re-explore the realm of pork chops – with this jam of course.

Funny – I have never been a fan of pork chops, or pork in general, actually. I do love this merlot onion cherry jam though…I could probably eat it with a spoon!

I love your tips on making the perfect pork chop, Jackie! The temperature one just explained a lot to me 🙂 Pinning!

I’m not a pork chop fan either but I’d gladly make this any day of the week! Plus, I have a meat thermometer so I’m all set for this! 🙂

You know I am the same way, I am not a huge fan of pork chops or pork in general in most cases. If I am going to eat it, it better look that this delicious meal!

girl, i hear ya! I’m not a huge fan of the "other white meat" but when cooked right and especially topped with that killer jam you’ve got – it’s definitely a star on the dinner table!!

Uau this is amazing! love it thanks 🙂

I’m with you. I love pork in general but I almost never work with chops. But these definitely look like they’re worth a go!

I’m totally like you–never really been a big fan of pork chops although starting to become more one with them! 🙂

I’m excited about the onion cherry jam! My husband would love the added onions in it 🙂

Pork chops are so easy to overcook they are not my first choice of meat. But using your tips, I feel as if they would come out perfectly moist. Plus that jam doesn’t look to shabby either.

Anything that claims to be perfect, is on my to do list… these really do look perfect. Can’t wait to try it!

I feel like my pork is always dry when I make it unless I do pulled pork in a slow cooker, lol! Can I just eat this jam with a spoon?!

Great tips! Pork chops really can be difficult but your method is definitely worth a try. I know this jam would complement them perfectly!

Hi above you say "died" cherries. Should this be dried or diced? Or am I missing out in another kind of cherry? 🙂 thanks!

Dried cherries. I get them at Trader Joes, but a lot of market sell them by the raisins. They are great, perfect in salads too!