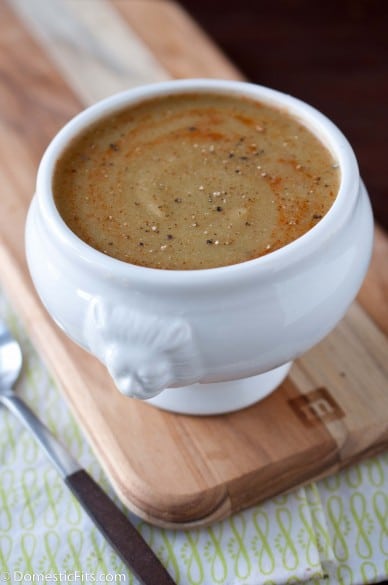 While this theory has been widely discredited, there is no arguing with the fact that this is an incredible list of foods. If more than half of your diet was pulled from the above list, and the rest of your diet was "sensible" you would never have to diet again and those skinny jeans would be yours.

Even if this soup isn’t "Negative Calorie," it still only has 78 calories per serving. 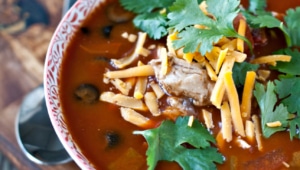 Chicken Enchilada Soup & Foodies Things To Do in L.A.

How To: Make Sushi

I love asparagus and cauli.

I also love chocolate and browned butter and heavy cream. So the soup is a keeper!

ME too! Its all about balance, right?

I fell in love with roasted cauliflower soup this winter, so I can’t wait to try yours! That’s a seriously impressive list of supposedly neg cal foods… I got kind of excited reading it. 🙂 I think I’ll try your soup for a week, I’m all about bringing lunches to work!

(btw you’ve missed the cauliflower off the ingredients list 🙂 )

You’re the best! I cut and pasted from a word doc, I must not have grabbed the first line. Thanks! I fixed it 🙂

This theory is new to me. I am not a calorie counting person but almost every item in the list sounds delicious 🙂

Interesting theories and experiments…ah who cares I just want the soup!!! 🙂

This soup looks amazing, but I’m with you, I’m not sure it’s negative calorie 🙂 haha! But yum anyway!

Your list includes my favorite veggies! I will definitely have to try this gorgeous soup. I could use some negative calories right now.

Why can’t pizza and chocolate be on that list? And martinis and cheese and…

Wow! I knew about the celery but nothing about the rest. This soup looks like a comfort in a bowl! I love roasted veggies so I am sure this soups is amazing!

I’m down with this concept. Nothing beats good veggies. Especially roasted veggies, which just that that super-intensified flavor!

Even if this didn’t make me lose weight, I’d be happy to eat your yummy soup every day for lunch! It sounds amazing!!!

ummm I’m printing that list and eating a bunch of stuff off it. i would love to have negative calorie foods haha

That is quite the list of negative calorie foods. I love this soup too. I’ve been living on soup lately!

Reminds me of subtraction soup from The Phantom Tollbooth. I can’t wait to try it!

I love the idea of negative calories! I would eat these foods all day long, lol. True or not, this soup looks delish!

The calories burned by chewing is negligible. Calories burned by digestion might make some foods have "negative calories" when they’re raw and take more work to digest, but cooking and pureeing those veggies surely negatives that effect. Still, the soup sounds yummy!

Don’t I WISH chewing burned a bunch of calories! I think overall, it’s an interesting theory and you’re right mostly applies to raw, ice cold food. But either way, it’s a great list of foods to keep front and center in your diet!

I recommend the book Catching Fire: How Cooking Made Us Human by Richard Wrangham if you’re interested in how modifying foods affects their calorie-availability!

Thanks for the recommendation! I always find food history so interesting.

i’d like some of this soup. it looks healing!

keep dreaming that there is such thing as negative calories haha

I’m still struggling to lose weight but I think i could eat more of those foods and itmight help. worth a try, they are all good.

I made a few batches of vegan soup last week and have been doing the same thing – soup everyday for lunch – and while I haven’t weighed myself, I totally feel it slimming me up. Plus, it tastes great, so I don’t dread eating it. Totally bookmarking this one, Jackie! Can’t wait to try.

I’m all for negative-calorie foods! Bring on the soup – I’ll have 2 bowls, please.

For a low calorie soup, not bad! will make again, but i’ll probably add cream, even though it would be vegan like you want

[…] Negative calorie ingredients may lead to weight loss? Jackie investigates with a soup recipe to die(t) […]

This soup sounds tasty, healthy, and easy. It’s a triple-threat!

P.S. It’s totally a negative calorie dish. Just dance around the kitchen for the 20 minutes it takes the veggies to roast, and voila – you burn more calories making it than you gain from eating it! 😀

Made this recipe and love it! It wasn’t getting blended enough with the immersion blender so I put it into the Blendtec and added some spinach leaves (uncooked) to my individual serving and blended it on the soup setting–absolutely delicious. I think if you added spinach to the whole thing it would end up turning brown, so did it for just the individual serving–so delicious. Thanks!

YAY! I’m glad you like it 🙂 I really liked it too, especially since it was under 80 calories, hard to beat that!

This soup looks delicious! Although, I think that by cooking the vegetables and puréeing them into soup you have cancelled out any negative calorie potential – as you’re not chewing up or digesting raw vegetables you are really burning very little calories as you eat this. I think that the reason you lost weight is because this would be a very low calorie option with no carbs or sugar.

I agree! I’m not totally sold on the idea of negative calorie foods in the first place, but I think it’s biggest potential is with very cold raw foods. But no matter how you eat them, these are all really great foods 🙂

This information is completely incorrect. The energy required to digest a foodstuff Is calculated and factored into the calorific value that gets given to the food. Negative calorie foods don’t exist.

Ladies and gentleman, this is what happens when you don’t read the entire post!

this sounds absolutely divine and cleansing!

Roasted Asparagus and Cauliflower Soup | leafing through February 21, 2013 um 2:48 am

Has anyone actually tried to make this recipe yet? I just finished making it and I failed:( I followed all of the instructions but my final result is more like mush than the creamy velvetty soup that is pictured – any suggestions?

I’ve had several people make it and report good results. Do you think it could be your blender? Maybe try some more broth?

do you think I can freeze the soup? I am the only one in the house that likes cauliflower, but I am not sure I will to have the same soup for a week. LOL

[…] Negative Calorie Roasted Asparagus and Cauliflower Soup – The thought of a negative calorie meal is definitely inviting, since eating it would actually burn calories. Whether or not that’s the case here is moot because it tastes too good to care. The health benefits of asparagus and cauliflower are well-documented, and while the resulting color of the soup is not much to look at, you’ll likely return for the flavor it contains. […]

[…] Negative Calorie Roasted Asparagus and Cauliflower Soup – The thought of a negative calorie meal is definitely inviting, since eating it would actually burn calories. Whether or not that’s the case here is moot because it tastes too good to care. The health benefits of asparagus and cauliflower are well-documented, and while the resulting color of the soup is not much to look at, you’ll likely return for the flavor it contains. […]

Made a similar soup without the asparagus, and I used the cauliflower water instead of vegetable broth and seasoned with above seasonings and a 1/4 tsp. of thyme. So delicious!!

I made this last night for dinner. I absolutely loved it and so did my husband. I have shared the recipe with some friends to try! This is a keeper.

Soup sound amazing. Can’t wait to try. You had me going on the negative calorie debate until the end of the list with all those sugary fruits. Lol