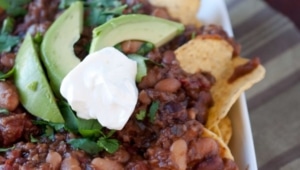 If you’re new to the Craft Beer scene, it might surprise you how many vegetarian and vegans there are here.

While I am a meat eater (clearly, I put bacon in desserts), I did spend three years as a vegetarian. Mostly, this was a response to growing up on a farm and getting up close and personal to the butchering process as well as the jarring realization of knowing the first name of my dinner. It did, however, give me a profound respect for the food I eat and the farms that share that respect.

I still eat vegan quite often, and there are some dishes, like lasagna, that I just think are just better in vegetarian form.

My true and honest feeling about vegan cooking is that regardless of what your typical diet is if you can’t cook a vegan meal that you love, you just aren’t that good of a cook. Produce is amazing, you get to use all the grains, seeds and nuts that you want and by the way, for the most part beer is vegan.

I first heard about Cashew Cream from this guy, and the idea was intriguing, given that I would have a much easier time giving up meat than sour cream and goat cheese. I like the idea of having a creamy element when I want to go non-dairy. This cashew cream was a really beautiful creamy addition to a vegan chili, when sour cream isn’t an option. I wanted to balance the sweetness so I added some acid and some spices, but feel free to experiment. This would also be a great place to add a little chipotle.