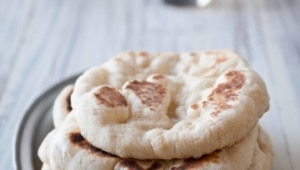 Do you remember when I told you that once I discovered that homemade corn tortillas where so good it made me realize that I didn’t actually hate corn tortillas, I just hated those sad cardboard disks they sell at the store? Pita bread is an even bigger revelation. It’s not as quick as those 10-minute homemade tortillas, but it’s so soft and addictingly amazing, it’s worth the time. It’s about 15 minutes of active time and another 45 to 60 minutes of rising time.  About an hour all in.  An hour well spent. Pita bread was the first yeast bread I ever made which helped me to conquer my fear of yeast and made me wonder what I was so scared of. For this, and for most bread recipes, I like a wheat beer, especially an unfiltered wheat beer. The bready notes and the yeast in the beer give a great texture with a hint of beer on the back end.