If you read my How To Make Stuffed Cupcakes post, these pictures probably look familiar to you. I had so many people ask for that recipe (OK, one. One person asked, but still…) that I decided to post my recipe for Boston Cream Pie cupcakes.

2 large eggs, plus one extra yolk

For the Ganache Frosting:

Add the batter to the cupcake papers until about 2/3 filled.

Bake for 25-30 minutes or until the cake springs back when touched.

While those are baking, make the pastry cream. You’re gonna love this stuff. I hope that this is what you will make from now on to fill your cakes with, instead of frosting. SO delicious, and pretty easy to make.

In a sauce pan over medium heat, bring the cream to a slight simmer, removing from heat when bubbles start to form around the edges. You don’t want to boil you cream, just heat it.

In a separate bowl, whisk the sugar, eggs and yolk, and flour until well combined and slightly frothy.

While continuing to whisk the egg mixture, add the cream about 1 tbs at a time. This is called tempering and basically, it’s a way to avoid turning your pastry cream into scrambled eggs. Once your have added about half the cream a tbs at a time, pour the rest in slowly and whisk until well combined.

Return the pastry cream to the stove and stir over medium/high heat until it comes to a rapid simmer. Continue to whisk until thickened, between 5 and 10 minutes. The cream should leave a track when you drag the whisk through it.

Remove from heat and stir in the vanilla. This needs to cool before putting into a piping bag. Pour into a bowl and cover with plastic wrap, pressing it to the surface of the cream. This will avoid that gross skin that used to grow on top of the homemade pudding your grandma used to make when it sat in the fridge too long.

You may, or may not remember my How To Make Stuffed Cupcakes post, but you use the same method of filling as I used for those.

Take a small paring knife and remove a chunk of the center of the cupcake. Make sure you leave an ample amount of the wall and sides of the cupcake intact or the filling will run all over the place. Once the cream has cooled, spoon into a piping bag. Pipe the pastry cream into the middle of the cupcakes.

Next, make the ganache. Ganache is really easy to make, and a fantastic alternative to frosting. This can also be used as a fabulous cake filling.

Put the chocolate in a heat safe bowl, sprinkle with espresso powder. You can omit the espresso powder, but the coffee flavor doesn’t come through with such a small amount. Coffee brightens the flavor of chocolate, that’s why so many chocolate cake recipes call for it. Heat the cream (microwave or stove, either is fine) until hot and steamy but NOT boiling. Pour the cream over the chocolate and stir. For a while, you are gonna stir and stir, and it will just look like chunky chocolate milk. Dip your cupcakes in the warm ganache, swirl a bit. 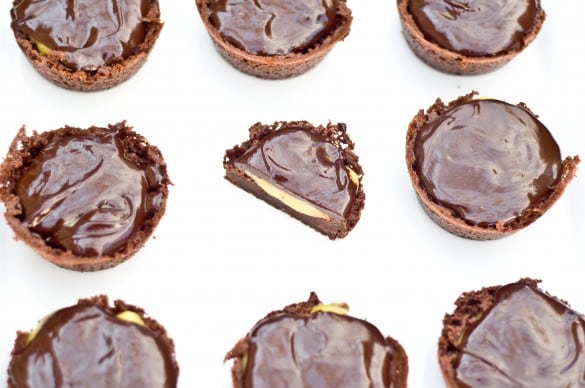 I originally titled these: Chocolate Shortbread Cookies with Orange Cream and Chocolate Orange Ganache. Although that is much more descriptive, it was just too dang long. I wanted something to bring to the Los Angeles Food Bloggers Meeting, and this is how these things evolved in my brain:

I should try to make chocolate shortbread cookies, but I want to put something on top. I’ll make them like the Mini Lemon Meringue Tarts, but use orange. And Ganache instead of meringue. Orange ganache. Hope this works.

For The Chocolate Shortbread:

For The  Orange Cream:

For The Orange Ganache:

1 tablespoon Cointreau or other orange-flavored liqueur

Put about 2 tbs of the dough into each well of a muffin tin (spray with butter flavored cooking spray before hand), forming the dough up onto the side to make a cup with a large well in the center. 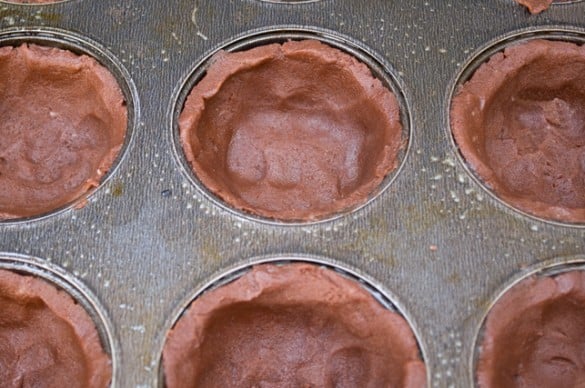 Chill the dough in the muffin tin for at least an hour.

Make the orange cream. I love this, it’s based on my lemon curd recipe but the orange is awesome.

Add the orange zest, orange juice, sugar and yolks to a bowl and mix well. Add the orange mixture to a pan over medium/low heat along with the butter.

Whisk until thickened, about 8 minutes. Once the mini tart shells are cooled, spoon in the orange cream.

Place the chocolate and the orange zest in a heat safe bowl. In a separate bowl, heat the cream and the orange-flavored liqueur until hot and steam, but not boiling (microwave is fine but you can also heat on the stove) and pour the hot cream over the chocolate. Stir for about 3 minutes or until well combined. If you have never made ganache or chocolate sauce, you may get a bit concerned about half way through. It is completely normal for your sauce to look like chunky chocolate milk for the first few minutes, just keep stirring and it’ll all work out.

Allow the ganche to cool a bit, then add it to the top of the cookies. 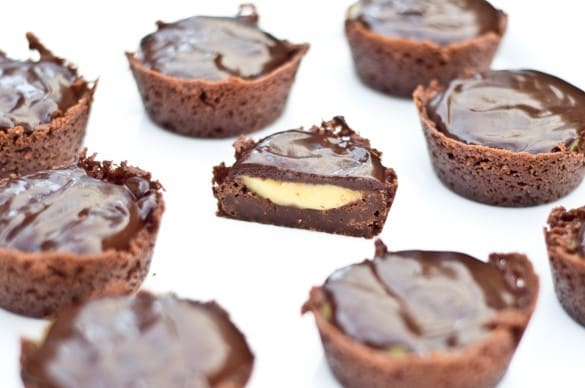