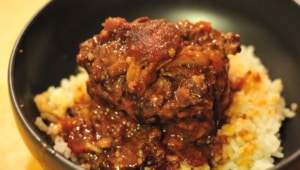 Oxtails scare me a bit. Not really because of what they are, but the gamey-ness is hard to tackle at times. This recipe was inspired by Carne Asada, another cut of meat that finds a delicious outcome only after the right treatment. A reminder that there really isn’t a “throw away” cut of meat, just ones that need the right touch.

Braising just means you brown the meat first, and then slow cook it in liquid. Really similar to pot roasting, although much more fancy sounding.

You’ll need about 4-6 large oxtails. The most often overlooked step in successful browning is to pat the meat dry. Sounds really counter intuitive, to REMOVE moisture when you want your meet juicy, but its important, just trust me. After the patting, season the meat with salt, pepper, onion powder and smoked paprika and don’t be shy.

Roll them in flour

Once they are translucent and soft, take them out and set them a side. You’ll be putting them back in the pot soon.

Brown the oxtails on all sides, it’ll take about 10 minutes, work in batches if you have to. Add more olive oil if the pot starts to get dry, you want a thin layer at all times

Add all of the following to the pot:

3 chipotle chilies (from a can in Adobo sauce) chopped up, plus about 1 tbs of the Adobo sauce

pinch of salt and pepper

lower the heat to maintain a low simmer and put the lid on. Cook for 2 1/2 hours, stir occasionally. Then take the lid off and add 1 tbs Grade B Maple syrup, juice from 2 more oranges and simmer uncovered until the sauce reduces and thickens a bit, about 20 minutes. Serve over rice