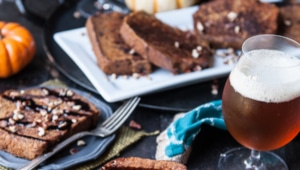 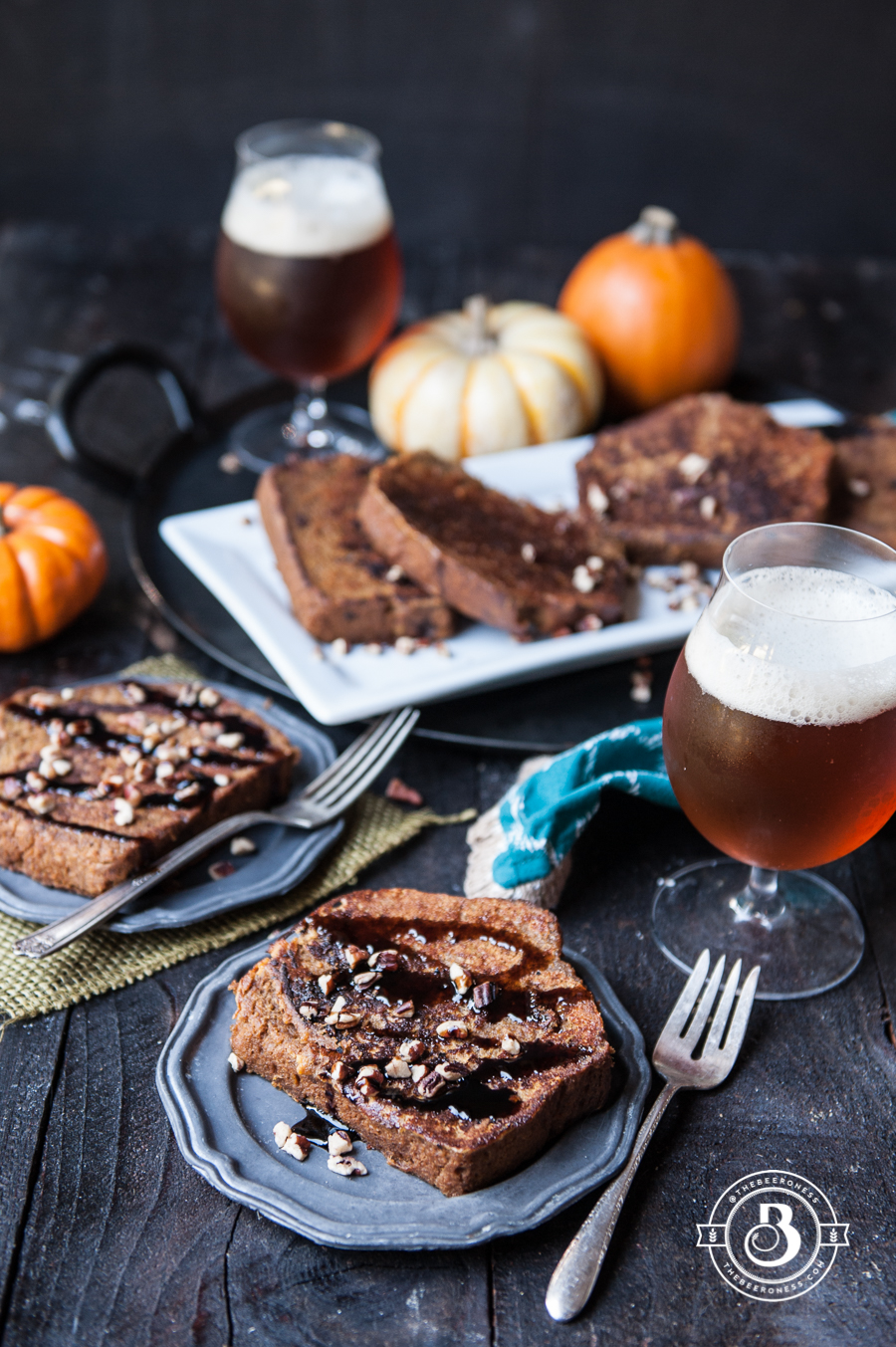 I’ll give you a quick and easy way to tell if your favorite pumpkin beer was made with fresh pumpkins or the canned version.

It takes weeks to brew a beer, and pumpkins reach full maturity, ready to harvest and roast for brewing, sometimes around late August. Making those beers released in July nearly impossible to brew with fresh pumpkins.

Canned pumpkin isn’t even the issue. Several breweries successfully make very complex, well-balanced beer with canned pumpkin every year. The issue is more about the impact that the early release dates have on breweries that want to use fresh. The arc of pumpkin season starts so soon, due to the canned-pumpkin beers, that by the time the fresh-pumpkin-using-breweries releases their beer, the moment has passed when it really should just be starting. A fresh brewed pumpkin beer will arrive on store shelves, at earliest, in mid-September. A much more appropriate  time for a pumpkin flavored beer to be consumed. Unfortunately, at this point pumpkin beer coverage has been going on for months, making the release of fresh pumpkin beers seem like old news.

Pumpkin beer also ages well. For this I used a bottle of Rogue Pumpkin Patch ale from last year, made with pumpkins they grow on their farms, and it was even better this year than last. The flavors round out and have a deeper, more complex flavor. You can save this years pumpkin beers for next year, if you really jones for a mid-summer squash ales.

Maybe this doesn’t bother you, maybe you don’t mind a 100 degree, mid-July pumpkin porter. Or maybe you hate it. What can you do if this does, in fact, bother you? Make a bigger deal out of fresh brewed pumpkin beer, don’t buy any before middle September,  don’t post anything on social until fresh pumpkin beers have been released, and thank the hard working brewers that not only brewed you a pumpkin beer, they also grew, harvested and roasted those pumpkins. 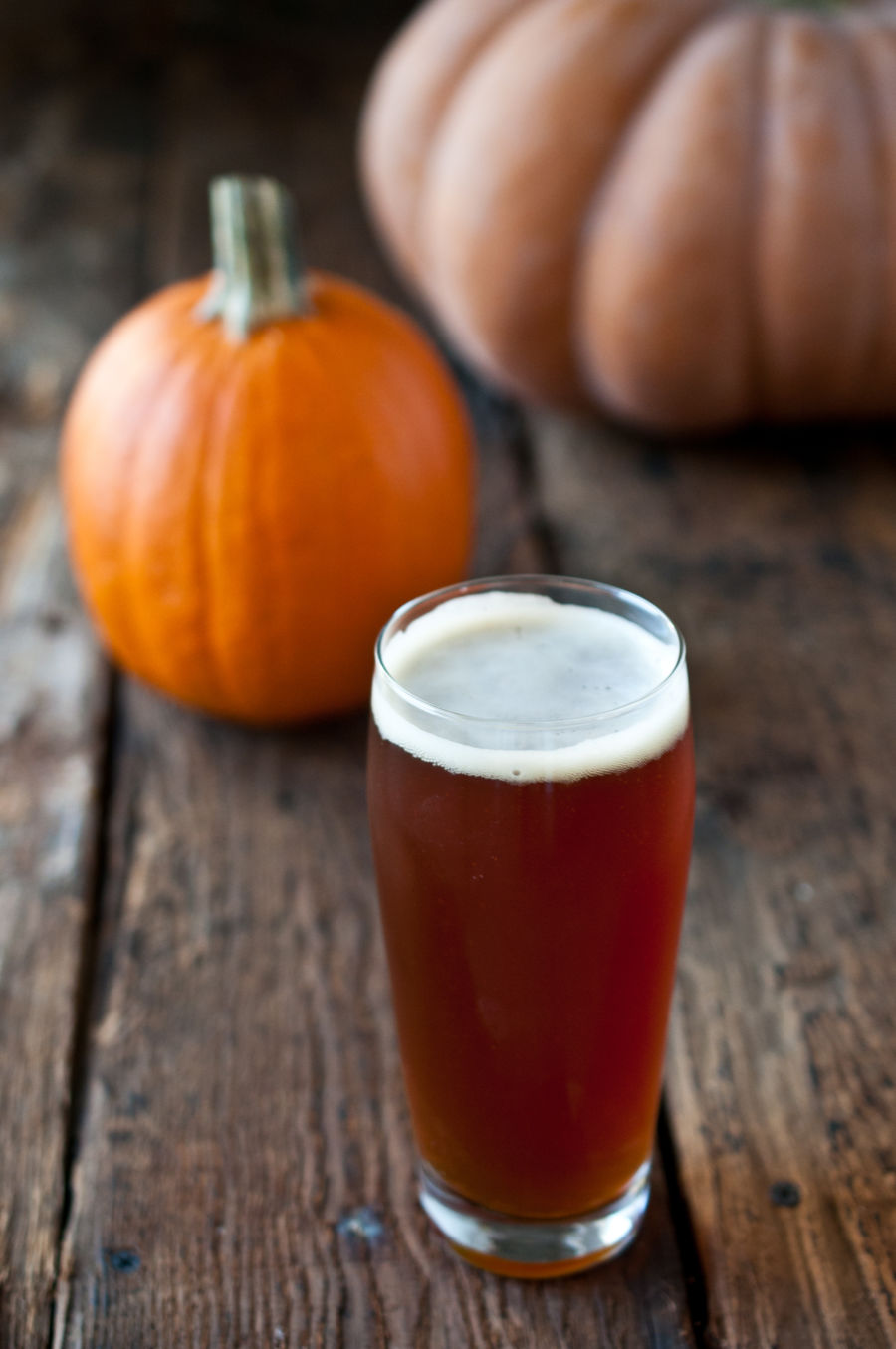 For the Pumpkin Beer Bread
For the French Toast: 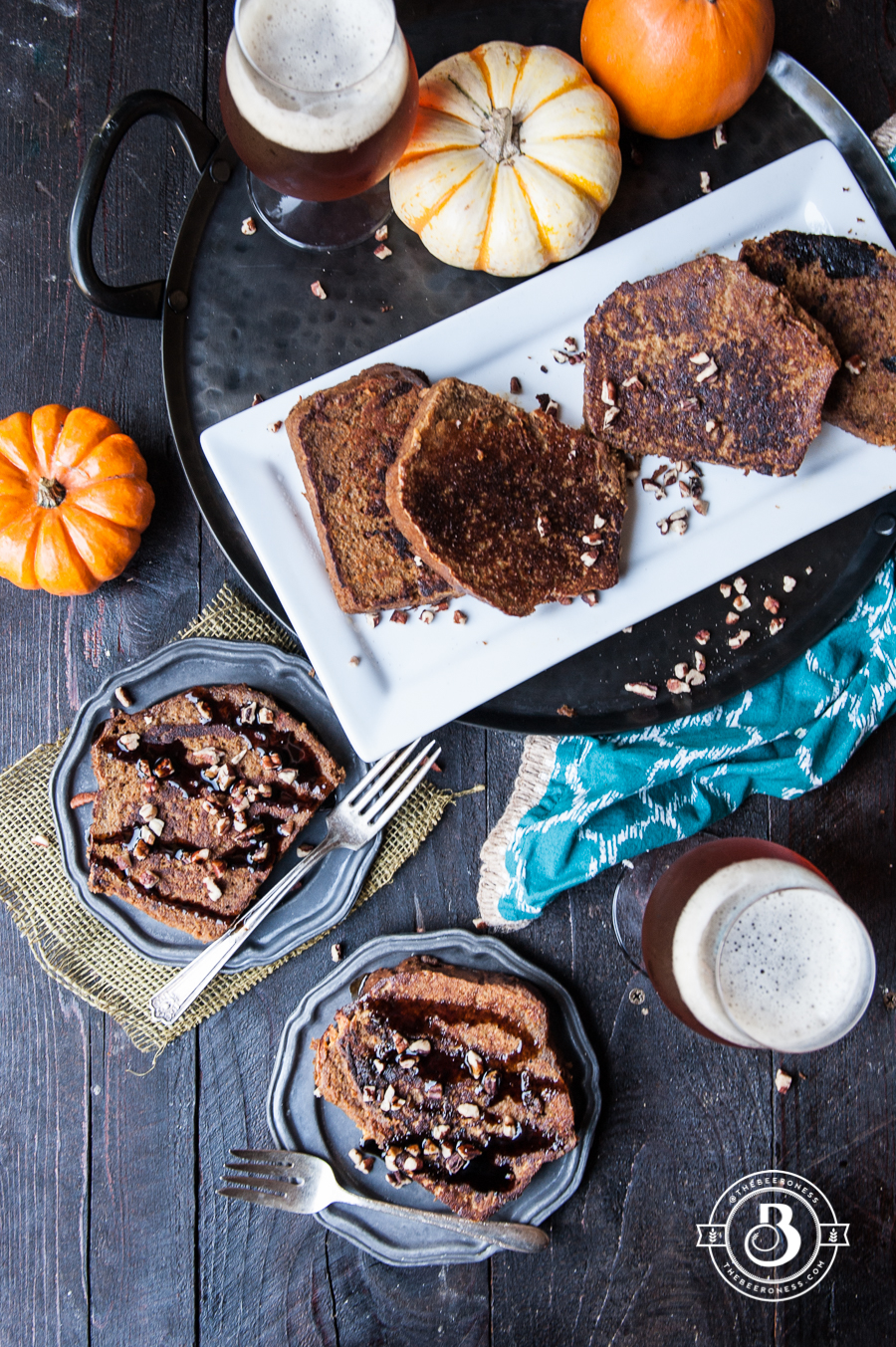 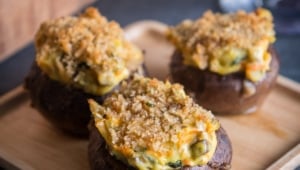 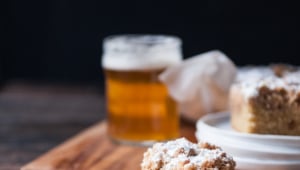 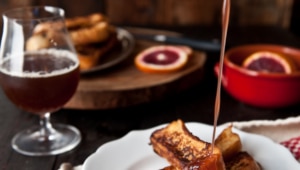 This bread absolutely screams fall and everything cozy and wonderful about pumpkin season!

Aside from the Rogue pumpkin ale mentioned, do you have a favorite pumpkin beer?

When I was living in LA I really liked the pumpkin beer that Hangar 24 put out, the have an event every where their customers can help them cut and roast the pumpkins in a big barbecue before they brew. Fort George also has a good one, but I think it stays in Oregon. Dogfish head makes theirs with fresh pumpkins too. Punkuccino from Elyssian is pretty great too.

That Gourdgeous by Hangar is one of my favorite pumpkin brews too… I never participated in the pumpkin roast, but was there getting a growler fill while it was happening. Pretty awesome! I picked up a 4-pack of the Dogfish Head, and am stoked to finally be able to try it!

This looks awesome! The perfect use for some of that pumpkin beer with the spices we have become accustomed to!

Elysian puts on a pumpkin brewfest every October at their Georgetown brewery. It’s huge, tons of different pumpkin beers, and a lot of fun. Go if you can. They sell out pretty fast, but I think you might have connections :). I have worked there pouring beer as a volunteer for the last couple years. Good fun, too.

I’ve been to Elysian, and I like their pumpkin beers. I’ll have to check it out this year 🙂

Interesting point about the pumpkin beer, and gorgeous photos! I’m going to have to try aging a pumpkin beer this year, but it’ll have to wait for next fall—I’m definitely not the kind of person who can drink it on a 90 degree day in the summer. 🙂

This sounds DELICIOUS!!! Wondering how the bread stands on it’s own? I was thinking of making it and serving it with a turkey-pumpkin chili. Thought the savory pumpkin would pair nicely with the slightly sweet/yeasty tang of your pumpkin beer bread. I know – it sounds like pumpkin overkill – but I just can’t help myself this time of year it seems… What do you think?

That sounds like a great idea! I also have a pumpkin corn bread that might work well for that too: https://domesticfits.com/2015/10/07/pumpkin-ale-cornbread/

Oh YUM. I think I’ll make the beer bread this go round (and hope for leftovers to make your french toast the next day!!!)…and then that cornbread is DEFINITELY next! Thank you!!