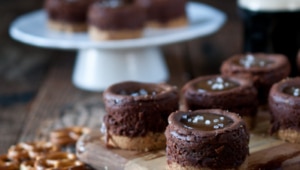 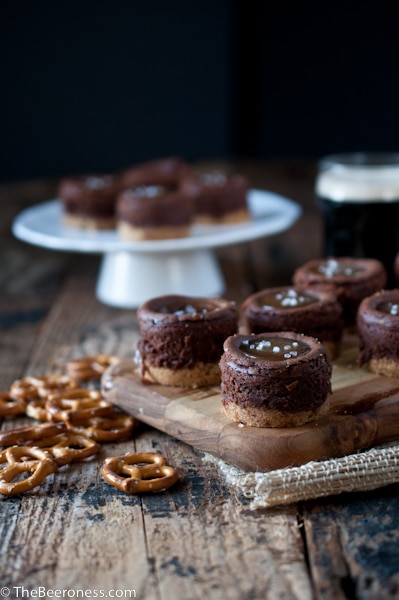 I’m the kind of girl that brings beer to a baby shower.

Which works out well, when it’s a digital baby shower for the kind of girl who likes those sorts of things. Like my friend Bev who, in her multi tasking ways, is in the process of growing not one but two tiny humans in her guts. Which, in my book, means that she earned herself a few beers once her womb has been vacated.

The blogging community, much like the beer community, is about collaboration. It’s a rising tide lifts all ships, lets compare notes, share resource and support each other environment. We cheer each others successes, grieve with each other, Digital Bake Sale for each other, and throw these online parties to commemorate milestones. It’s a great community to be a part of. And I’ll never stop being grateful that I’ve found my way here.

In honor of Bev who is so crafty she makes two people at once, I’ve made some miniature beer infused cheesecakes. But don’t worry, the alcohol has cook off enough to make it safe for Pregnant Lady consumption*. 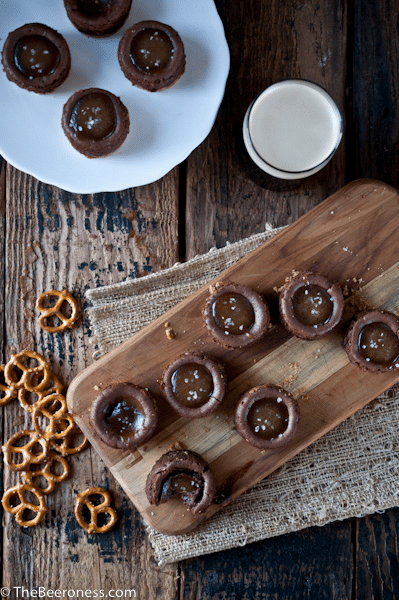 For the Crust:
For the Cheesecake:
For the Sauce: 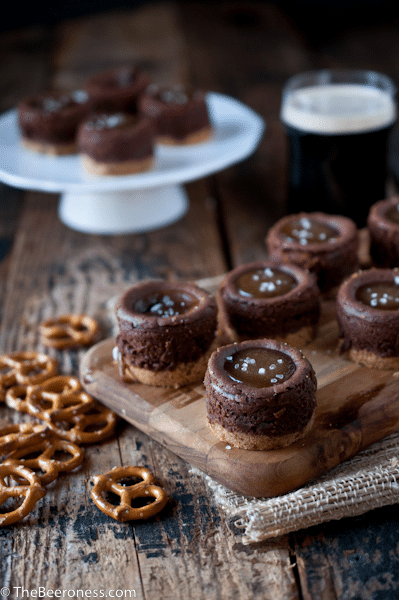 Check out the other Baby Shower recipes: 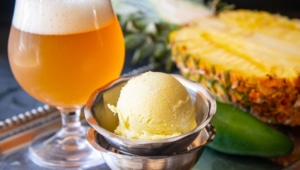 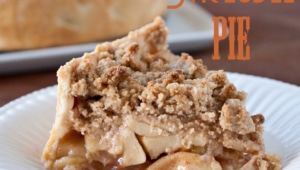 For the cream cheese, is it only one 8 oz package? The recipe reads:

I took out the word "packages" to make it less confusing, just 8 wt ounces.

I am digging these sooooo hard. LOVE that sauce!

How many "packages" of cream cheese? Can’t wait to make this!

I’ll take a whole glass of the caramel sauce please!

hehe! I love that you brought beer! 🙂

Amazing recipe! These have me convinced to head straight for the dessert table at this shower. 😉

Jackie, these are amazing! I’d eat these right NOW, since the booze cooks off. But I can assure you, I plan on revisiting a few beers (and wine) as soon as these babies are in air. Is 20 minutes after birth too soon?

THANK YOU for being a part of today’s surprise! And I love that I know you in person. Remember Seattle? That was dumb. Of course you do.

This community is incredible. Thank you so much!

LOVE this recipe! I made a similar cheesecake, but it was not perfect, it didn’t have beer either, LOL! But I am gonna try again with some of the tips here! I love a pretzel crust!

This is everything I love about dessert!!!

"I’m the kind of girl that brings beer to a baby shower." – and that’s why I like you! 🙂 I will eat Bev’s mini cheesecake for her until she is able.

All I’m saying is that I’d totally have eaten all of these if I’d had them at my shower. Mini means you can eat more, right?!

Sounds amazing! Quick questions, I see egg(s) as plural but the qty only specifies one. However in the directions it says to add eggs one at a time. Is only one egg required or more?

No, I fixed, not sure how that happened! Just one egg.

Woah! Now this is one fabulous treat for a shower. Pinning!

I think I stopped breathing. This is my idea of the perfect dessert. I need them.

I’m a firm believer that there always needs to be one boozy drink or treat for the non-preggo participants! And girlfriend you totally know how to throw a baby shower. Love it!

Jackie you amaze me… these are so badass and I love’em!

These are so perfect! And I love that you’re the girl who brings beer. I bring wine.

i love that you bring beer to everything. it’s necessary! these are the cutest little things. and seriously. that caramel? I want it on everything.

Love this and I love Bev. Delicous!

Oh my! These mini cheesecakes look delicious! I had to share on FB.

I enjoy what you guys tend to be up too. This kind of clever work and coverage!
Keep up the great works guys I’ve added you guys to my blogroll.

Such an awesome addition to the shower!

I saw Vanilla but didn’t see how much in the caramel sauce, so I didn’t use any

LOVE your recipes! I’m super excited to make these today using my husband’s freshly brewed Chocolate Espresso Stout for a home brew & food pairing party with friends later today. I have to use a muffin tin with liners-should I spray the liners with cooking spray?? Thanks!

Nope! Just use liners and then make sure to chill them and they should remove from the liners just fine.

I made this recipe over the weekend for my husband to take to work. I used his homemade stout and I was pleasantly surprised at how well everything fit together. I am not a fan of how "fussy" this recipe is and how much time it took to make everything but it was definitely worth it in the end. Thanks for a really interesting recipe using beer!

A friend of mine emailed me this recipe and requested i make it for is birthday. It sounds great, but I would prefer to make one large cheesecake. Do you have suggestions for adapting it? Thank you!!!

If I were you I’d do this recipe instead, but use the caramel sauce instead of the sour cream topping https://domesticfits.com/2012/04/10/chocolate-beer-cheesecake-with-a-pretzel-crust/

How many cheesecakes does this make? My pan has 24 cavities. Should I double the recipe?

I’ve made these twice now and they are so delicious and rich! I’ve received lots of great compliments! You should see their face when they take a bite! Thank you for the recipe!