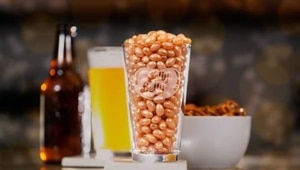 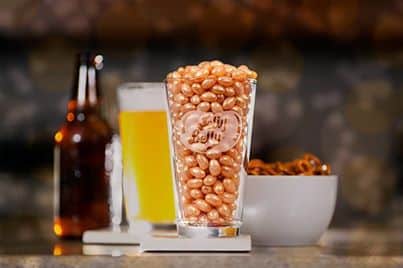 Beer Candy is a good sign. It’s a sign that these flavors we adore so much are so enjoyable to the mass market that they encourage large and successful companies to spend years developing those flavors into delicious non-alcoholic treats. It’s a win for the beer community.

Recently Jelly Belly released a new flavor, Draft Beer, which took three years of tedious flavor development to get right, and they nailed it. It’s first and foremost a jelly bean, a candy that is meant to convey a flavor while pleasing the candy consuming public. But what does taste like?

But what kind of beer? In the beer community, this is the question that is asked when anything is beer flavored, “what KIND of beer?”

Developing a candy that taste like beer in general is much more difficult than developing a specific beer flavor, the candy has to represent the spectrum as a whole and this is a candy that does that well.

But that’s not enough of an answer for you, you want to know what kind of beer it tastes like.

Sparing you from the Beer Advocate user review taste synopsis, and without using the cringe inducing beer term mouthfeel, here is what those jelly beans taste like:

The smell is more of a pilsner and you get that right away. The initial taste is a bit of a Hefeweizen you get those honey and bready notes, and there is a bit of a cream ale flavor in there as well, and it ends with the taste of a sweet honey like flavor that reminds you that it is, in fact, a jelly bean.

Given that the bean has a great beer flavor, it’s not hard to concoct your own beer styles using the Draft Beer Jelly Belly as a base. The worlds first beer flavored jelly beans is worth a try for any beer lover. You can order them at the Jelly Belly online store if you’re curious enough to want to taste them for yourself.

I’m so excited to try these! I’m ordering some for my brother-in-law as an early bday gift, too 🙂

Bummer. They are already sold out, until Feb 10th. Was hoping to order for Valentines day.

oh my gosh, these are great! On the look out for them now. 🙂