How To: Roast a Chicken 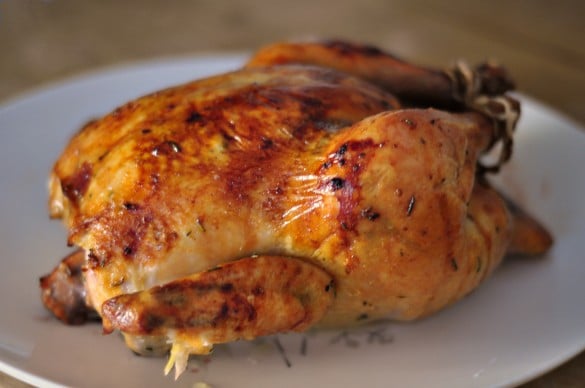 I can’t stop thinking about chicken. Not any chicken,the Foster Farms Chicken Cooking Contest. I am Semi-Finalist for California. Of course I’m excited, giddy even. But I am also so dang nervous. In only 11 days (11DAYS!!) I go to San Diego to compete. Last weekend the Washington Semi-Finalists competed and the winners were:

Seriously, how yum do those sound? But more immediate is that fact that in order to even GET to compete with those two in Napa in September, I have to beat out the following recipes:

But after reading those, I’m also hungry. I hope that I at least get offered a taste, because I’ll take it. Or maybe two.

Most people don’t do much bird roastin' outside of late November. Probably because an entire day of roasting a turkey, and an entire night of dishes is something most people don’t welcome more than once a year, although neither of these take place when roasting a little chicken for only a few people, I think the scars of Thanksgiving clean up run deep. Let me give you my arguments for why you should roast a chicken at least once a month:

1. It’s cheap. Really. The last time I bought a roasting chicken I got it in a Los Angeles grocery store for $5, and it feed 4 people.

2. It’s easy, the step by step will show you that.

3. Homemade broth is delicious. Just take whatever is left of that chicken, put it in a big stock pot, cover it with water and allow to simmer for 2-4 hours. Strain out all the solid parts (use a colander lined with cheese cloth) and freeze one cup at a time in Tupperware (I’ve even been known to use zip lock bags) and defrost as needed. That alone will get you $5 worth of chicken broth.

4. It’s yummy AND healthy. Yummy, healthy and cheap is the trifecta when it comes to cooking for your family.

How to Roast a Chicken

Defrost the chicken. It’s safest to do this by leaving it in the fridge for a few days. Although I don’t recommend it (unsafe food handling an all) some people run frozen meat under warm water.

Take the gross insides out. You can save them to make broth, if you want, or just toss them to the dog (my dog, who eats raw garlic and sticks, politely declined).

Rinse it off and pat it dry. Seems weird, since you want a juicy bird, but this is how to get crispy skin.

Salt the inside of the bird with about 1 tbs of salt. Then cut the top of the garlic (exposing the cloves, just cut it’s head off), chop the carrot, and put both the garlic (sans top) and the carrot inside the bird.

In a food processor, add the butter, sage, 1 tsp salt, and the pepper. Blend it up.

Loosen the skin on the breast of the chicken by sliding your hands between the skin and the meat.

Then cover it with the herb butter you just made. Smear it all over the chicken, with your hands, and get it under the skin as well.

Tie the chicken feet together so it keeps it’s shape

Place it in a roasting pan, in the roasting rack. Under the chicken, pour 1 cup of broth and 1 cup of apple juice, but make sure the liquid doesn’t touch the chicken. Replenish the liquid when the pan starts to dry out. As the liquid evaporates, it steams the chicken, adding moisture and flavor.

Cook in the 425 degree oven for about 1 1/2 hours, or until the internal temp is about 165 (it will continue to cook another 5-10 degrees once removed from the oven). Bast with pan juices as necessary. Allow to rest 5 minutes before carving.

Feed it to people you love. Pretend like roasting a chicken is lots of hard work. People will be very impressed that you do it so often. 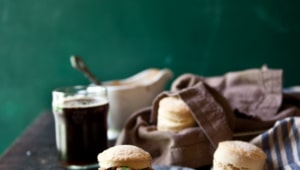 A Chicken & A Chance

I guess I would have chicken on the brain if I was competing also-congrats on getting to the semi finals! I can see why-your chicken picture is making me very hungry. Thanks for sharing this tasty recipe!

That is a perfect roasted chicken! Looks beautiful Jackie!

Thank you so much! It was pretty tasty!

That is a perfect roasted chicken! Looks beautiful Jackie! andyzhao1232011.blog.com

Great recipe and yummy pictures, we would be glad if you could submit it on our site Cheers 🙂

I hope you don’t mind me posting so much! I am going to roast a chicken based on your tutorial this weekend for a dinner I’m hosting and was wondering what your opinion was on brining the chicken ahead of time. Have you done this before? Does it make a significant difference? Thanks!

Mind?! I love it 🙂
I’ve brined before and I really like it, it takes longer but tends to give you a little more of a juicy end result. My best advice is to make sure and rinse the bird really well before cooking because brine is really salty. Also, the way I make my Thanksgiving turkey is to brine for 24 hours, rinse, and then leave it in the fridge uncovered for 24 hours so that the skin dries out, letting you get a juicy bird and a crispy skin.

Good luck and let me know how it goes!

So I did a fun experiment with the chickens. I made two (9 ppl) and did everything the same for them, following your tutorial, except one I brined and one I didn’t. Then I had my guests tell me which they liked better and if there could see a difference without telling them which was which. The consensus was the brined one.

Anyways, they came out great. I loved the sage and I liked the advice about letting the skin dray out after brining. Thanks again!

Julia, that is a fun experiment! I do like brined as well. Thats how I will always make my turkey! What brine recipe did you use?

a very simple one. half cup salt, quarter cup sugar to a gallon of water.

My husband has to limit his sodium intake. Does rinsing off the brine before cooking take most of the sodium out, or does the chicken absorb enough of it to make it unhealthy for him?

I don’t know. It removes a large amount of the sodium, if you do’t rise the brine off, it’s overwhelmingly salty. But I’m not sure how much is really left behind. Here is a recipe for a low sodium brine: http://www.susanminor.org/forums/showthread.php?23-Low-Salt-Brine-Poultry-Brine-by-Habenero-Smoker

Is this roasted covered or uncovered?

Uncovered. If it starts to brown too much before it’s done cooking, then loosely tent it with foil.