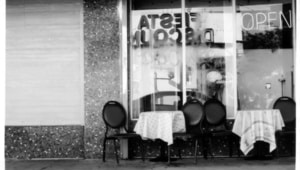 in or around Los Angeles over the past 10 years. Los Angeles has become a part of me, imbedded itself into my soul and grew me into the person I have become. Leaving feels heavy. It’s hard to say goodbye, to walk away, but I’m ready. I’m excited to take the next step into a new phase of my life even with the feeling of grief I have over leaving the City I’ve been in for so long. I’ve done more than just live here or even thrive here. LA has been more than just the backdrop to the majority of my life. She is a part of who I am and I love Los Angeles. I will fiercely defend her when outsiders can’t see past the Hollywood Portrayal of a very small side of the city I’m in love with. I was born in LA, briefly left, making my way back in my late teens behind the wheel of an old Ford Bronco packed with little more than a suitcase. I know LA, in a way that you can’t if you’ve never lived here. Like outsiders can never really know what it’s like to grow up in your family: it’s flawed and dirty and beautiful and yours. This is LA. LA has been good to me. She’s seen me fall in love, become broken, find myself, find a love for food, chase my dreams. But I’ve seen her change too. 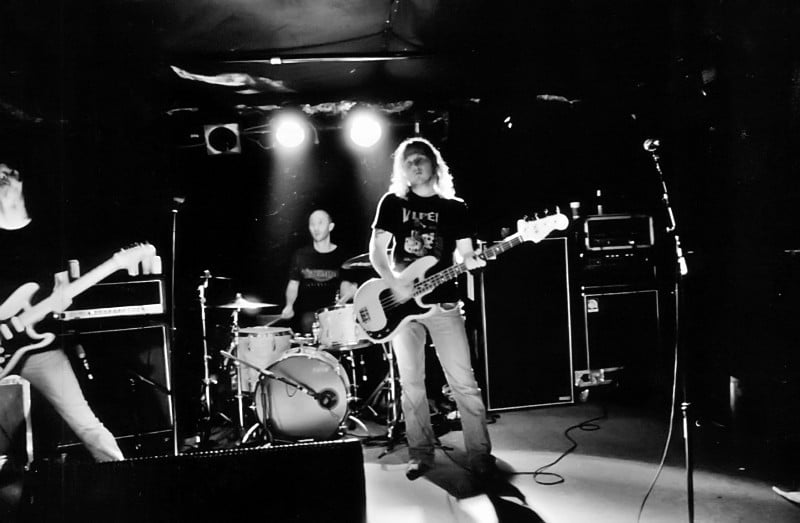 I’ve watched my friends go from homeless musicians to Grammy winners. I’ve worked with gang members in Compton. I’ve cried with holocaust survivors in Beverly Hills.  I’ve smoked cigars on the roof of Chateau Marmont with literal rock stars. I’ve eaten bacon wrapped hot dogs outside The Short Stop and burritos on Sunset at 3 am. I’ve watched the sunrise over an empty beach in the middle of winter. I’ve been trapped inside a broken down car on the 405 at rush hour. I’ve watched the beer scene go from non-existent to thriving. I’ve played Guitar Hero with famous musicians at Sound City Recording Studio. I’ve worked a waitress job for a money launderer. I’ve bartended a party at a crumbling Frank Lloyd Wright house.  I’ve stuck the Troubadour VIP sticker on the thigh of my jeans many, many times. I’ve spent the afternoon talking to homeless vets on the streets of Downtown. I’ve gotten lost on the worthless Metro. I taught a homeless kid how to drive a stick shift at 5am in a mall parking lot. I’ve eaten dinner on stage at The Hollywood Bowl. I’ve been an extra in a movie and witness a drive by shooting in the same day. I walked a catwalk in nearly nothing at a low-budget European designers US press show. The moments haven’t all been pretty, but they haven’t been dull. There is this feeling in LA, that if you find the right place and stand there long enough, the entire world will walk past you. And it’s with a heavy heart that I leave. But I’m taking LA with me. The person I’ve been made into, the food I’ve fallen in love with, the beer that is a part of my story and a part of my life.

This isn’t Goodbye, LA. Not really. I’m moving North, LA, but a part of me will always be your girl. I want you to join me on this journey. I’ll be posting on Instagram and Twitter. Follow me, give me your advice, show your support, watch me move and then explore a new city.

I’ll tell you more about where I’m going next week, come back and I’ll tell you all about the new city that I’ll be writing The Beeroness from and the great beer they have. If you’re in Los Angeles, come join me for one last pint at Basin 141 in Montrose, February 19th from 6 to 9PM. I’ll be signing books and the kitchen will be making some of my dishes. The fantastic Eagle Rock Brewery will be there too, taking over all the taps.

Today, lets eat some pasta. With beer from one of my favorite Los Angeles breweries, Angel City, as well as Avocados, which might as well be California’s official State Fruit. 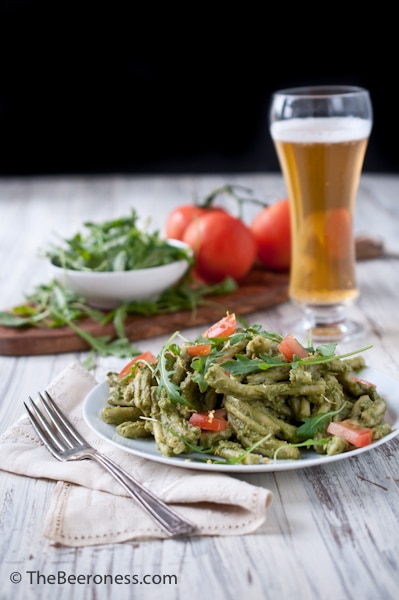 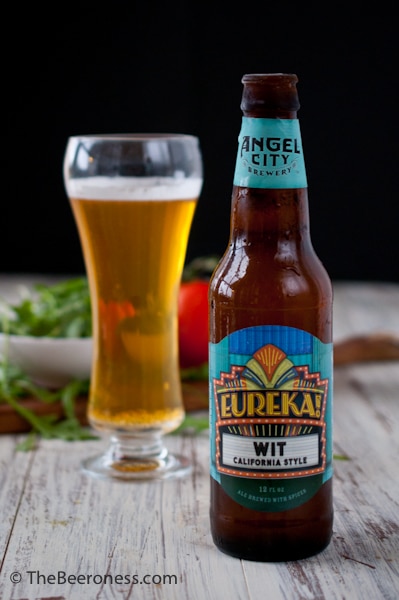 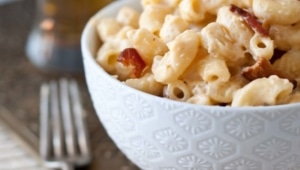 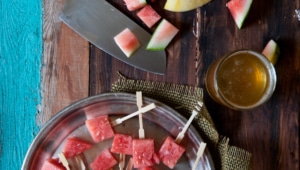 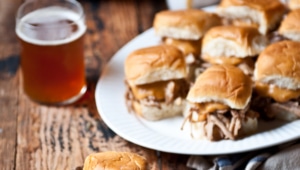 What an awesome, awesome post! So well-written and I had goosebumps, smirks, smiles, and nods of agreement with so many things you wrote! You are an awesome writer, Jackie! And of course, can’t wait to hear where you’re headed!

Great post! Wish I was in LA to join you on your send off

While I didn’t have QUITE the same experiences as you (totally jealous BTW) after living in LA and leaving, well, theres something about that city that gets under your skin. Both good and bad. I miss it in many ways, and don’t in many more. Can’t wait to hear about your new adventure. Sometimes, it’s just time…

Wow, it sounds like you’ve had an incredible life in LA! This pasta looks delicious and I wish you luck in your move 🙂

Wow, what neat memories! Can’t wait to hear about where your life is taking you next! Good luck!

Wish you the best of luck on your new adventure! I’m sure you will rock it!

The best to you on your new adventure. Moving sucks, but heading north in California will be cool. Great beers in NOCAL

What an incredible, incredible post Jackie! Seriously, you have live on heck of a life. To be honest, LA scares the shit out of me. I was only there for school and working at the same time, so I did not get to give years of chances. My older brother is actually living there now, so I am excited to visit and just have some fun.

I am so excited for you and your new adventures. I cannot wait to hear more!

Fabulous post! You have some amazing memories and I’m sure you will make more anywhere you find yourself.

To many new adventures! I look forward to hearing about your new city.

What a beautiful tribute! Congrats and GRACE to you- moving is a bear (as you know)
CHEERS!

Wow, how exciting, Jackie! Congrats on your big move. Excited to hear where it will be to. I have a hunch but who knows??? 😉

Also, your photos of LA are gorgeous. Your love for it is obvious and deep.

Wow…I wish you all the best and I know you’ll have barrels of fun! Take care 🙂

Oh noooooo! I’m coming to LA 2/22!! Will you be in town any longer??? I would love to meet you. This is a super cool post, WOW Jackie you know how to live! I hope your next city is NY!!

Jackie, so you are moving up north, great. The big c athletic club wants you for a beer cooking seminar.
Dave

What an incredible piece of writing, you are so talented my dear friend. You had me on the edge of my seat thinking you’re moving to Michigan! Dirty rat…

Great post! Can’t wait to read more. Best of luck with the move!

Love these photos and your story…can’t wait to hear about the next chapter!

So when you say "moving north", how far north is it?!? I’ll be sitting here with crossed fingers! XOXO,

So sad to hear this but you will have wonderful adventures – just bummed we never got to podcast!

After four years in LA, I still feel like a tourist:) I read your post in one single breath and it made me wistful for a past that’s not mine. Your nostalgic moments awoke a weird sense of melancholy and joy and I thank you for letting me experience your LA, even virtually.

I wish you the best on your move north (wherever NORTH is:) Looking forward to following your hoppy adventures (sorry for the cheesy pun)!

LA will miss you! Can’t wait to hear about all the new adventures!

Yes. But I know I’ll be seeing you again. XOGREG

Great memories! Can’t wait to see what will be new on the horizon for you!

I just want to say I’ve followed your blog for a while but never commented. I’m excited to see where you go and follow along. thank you

i wish you BIG and GOOD on your new adventure!

Thank you Joy! Hope we can grab drinks next time I’m in LA 🙂

That is one of my favorite recipes! My husband adores this dish and I cook it very often. I like the pictures you have posted. Especially the picture of stones washed by the waves. It reminds me that summer is getting closer!

I want to tell you that I loved this post. Probably the best post I’ve read in a while which is why I love your blog! The photos are great and I can’t wait to read all about your journey.