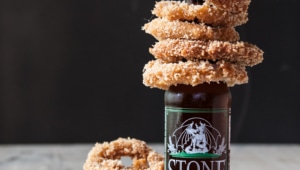 I was on a southbound flight a few weeks ago, the guy sitting next to me not picking up on my "I don’t talk to strangers on airplanes" vibes. He asked me what I did for a living, which is always a bit of a strange conversation when the answer is something along the lines of "I cook with craft beer, and then take pictures of it."

He rolls his eyes. "I hate that." I didn’t engage, I didn’t care what he hates or why he hates it. If he left me alone, I was fine with that.

After a few minutes of my not biting on his gem of a response to my chosen career, he gave up. "I mean….why does YOUR beer get to craft and other people’s isn’t? It seems so elitist."

Ahh…one of those guys. In his Brooks Brothers khakis and late 90’s briefcase he has decided what I’m allowed to call beer.

"I import. From China and Japan, teas mostly."

"Why? There is plenty of tea over here. Why not just use some grown in the US?"

He’s borderline outraged at the suggestion. "It’s not the same! The techniques people use, the old world skill, the attention to detail and process. People over there have a love for it, they consider it…."

"So, are you saying that your tea is craft tea and maybe Lipton, isn’t?"

I put my headphones in and ignore any more of his attempts to engage. The truth is craft breweries put quality above profit. They will sacrifice the amount they make on a beer in favor of using the best ingredients, but they won’t do it the other way around. There is a love and a respect for the product that can be felt in the industry. There is craft in every industry, with beer it’s just more obvious, more celebrated. Now let’s talk food for a second. When making onion rings, the onion selection makes a big difference.  Peel back those layers and all onions bring something different to your table. When selecting the best onion for your rings, you want a thick ring, lots of sweetness and a mellow flavor. Red onions don’t have the sweetness or the thickness you’re looking for. White onions are crisp and thick, but much too harsh and sharp in flavor. Yellow onions have more sweetness than white or red, but the layers tend to be fairly thin and the overall flavor can often be a bit sharper than is ideal. Your best bet is what’s known as a sweet onion.

Sweet onions have thick slices and a sweet flavor without giving you that sharp onion flavor that turns some away. The most common varieties are Walla Walla sweets, Maui, and Vidalia onions, all are the perfect choice for a thick batter and a quick deep fry and won’t leave you overpowered with a sharp onion taste.

For the beer, pick one that has some great carbonation and big flavor, those onion rings can take it. I like a pale ale or an IPA to get the job done. 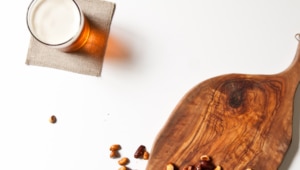 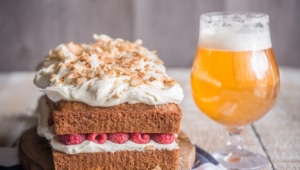 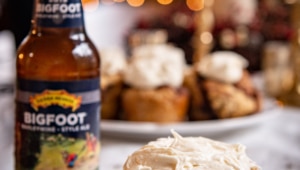 Holy crap girl, this looks unreal!! Love that there is some IPA in this. Yum!

Sounds like a great way to make onion rings! Definitely got to give this a shot next time we’re craving some. Thanks so much for sharing!

Now these are my kind of side dish! Now I’m craving them and I don’t think it’ll stop until I try this recipe. Must.Eat.Onion.Rings!

I think my hubby will love that onion rings! I have to try.

What some folks don’t get is that people get passionate about different things; to one a beer is a beer is a beer, and to another each individual beer is an exploration, a unique interpretation of a time-honored craft or a bold leap into something new and untested. Just because he doesn’t happen to be passionate about beer shouldn’t mean that it’s somehow trivial for others to, just like I don’t care one bit about tea but my opinion (or lack thereof) has no bearing on his appreciation for it.

LOVED reading your story about the snotty airplane guy. Way to stick up for what you do! You go girl 🙂 (PS- These onion rings look fantastic!!)

Best Onion Rings Ever – These are superior to most resturants…..the instructions to make these were very detailed…and easy to follow….thank you Jackie for sharing….Soooooooo good!