Bourbon Stout Cherries + What is A Barrel Aged Beer? 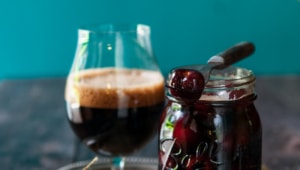 We would love to pretend like barrel aged beer is something a trend setting, bearded, flannel wearing brewer invented just a handful of years ago, igniting a craft beer phenomenon that’s taken over the bottle shops.

But that’s not the case. In the dawn of civilization, when beer and humanity where in their infancy, beer wasn’t just aged in wood barrels, but brewed, fermented and stored in wooden barrels. We’ve recently rediscovered the beautiful flavors oak barrels transmit into our beers. The caramel, vanilla, fruit and toffee, along with a huge kick of warm alcohol to our favorite brews, make these beers to seek out.

What is barrel aging?

You can age any beer in a barrel, some styles just happen to get there more frequently. Most beers that are chosen for barrel aging are usually darker, maltier beers. Think: stouts, porters, brown ales or scotch ales. Once the beer is brewed and ready for aging, it’s transferred to a wooden, usually oak, barrel. Breweries generally buy these barrels from wineries or distilleries, there is only one brewery in the world that makes their own, Rogue Ales in Portland. Most of the time these are barrels that were perviously used to age wine or spirits. Bourbon barrels are the most common. Since these barrels had previously housed bourbon for years, the wood is still soaked with the liquor. As the beer ages in the barrels, the beer soaks up the liquor, taking on the flavors of the previous tenant. Beer is aged for as little as one month and as long as several years, but most commonly just less than a year. Barrel aged beers have an intensely boozy flavor, and a much higher ABV than most beer. They are best served in small amounts in snifter or tulip glasses. I’m a sucker for a good barrel aged stout. These are beers to share, beers to sample, beers that you don’t forget. For these boozy cherries, perfect for your next cocktail, I used Track #10 from The Lost Abbey. A beer that should be shared, and can’t be forgotten. 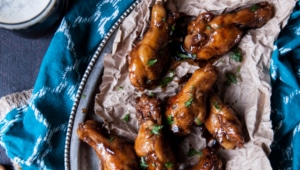 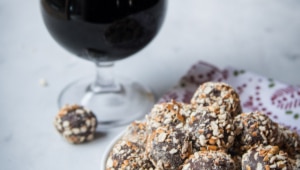 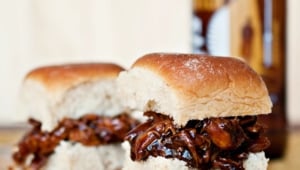 Hello Jackie! Congratulations! I have one suggestion for the recipe above. Use as a sauce for a rabbit, foie gras and a magret de canard. I will try when fresh cherries will be in season here in Brasil. I will let you know, but I’m quite sure that will be a nice dish to taste besides a glass of a stout brazilian beer. Cheers! Joao Roberto from Brasil. If you do have a chance visit my site.

This is a FABULOUS idea!! I love bourbon cherries, using a BA stout added to the mix is AMAZING! MUST try!

The cherries look delicious! I’m sucker for a barrel aged stout as well. I’ve been on an Alesmith Speedway Stout kick for months now. Lost Abbey and some of the other SoCal breweries have been experimenting with tequila barrels too…makes for some interesting beers.

Thanks for telling us about what barrel aged beer is actually and those cherries! I can see then in my future being topped on desserts.

How long will these keep for? Also, have you played around with adding spices to these?

I have no idea how long they keep, but I assume because of the bourbon it’s a long time. Some people say up to six months. I’d can them if I was going to keep them that long. I think adding cloves would be awesome.

Hello! first time making this kind of thing and they turned out great! really boozy, and a great present for friends. thanks.

I enjoy reading this one, will try the recipe this week, I hope that it would turn out great! I am not much of a drinker but will definitely try this one. Can I use a light beer for this one?

Thanks Kate! unfortunately, a light beer wouldn’t work. A barrel aged stout is aged in bourbon or rum barrels so it has a high alcohol content and the flavors of the bourbon/rum. You’d probably be better off just making regular Bourbon cherries! There are quite a few recipes on my blog that can use a light beer so I hope you find something you like 🙂

Hello! Can I use frozen cherries here? I have been eyeing your Stout Cranberry Chocolate Truffles…but want to perhaps try the cherries instead.

You can, but make sure they are thawed and dried well

If one was to can them, would the usual canning process be followed? They would make great Christmas gifts.

Yes, that should work just fine